A voluntary amateur body established to promote the practice of Kyudo,
the traditional art of the Japanese bow

Kyudo, which literally means “The Way of the Bow”, is the traditional form of archery developed in Japan over a thousand years ago. It has continued through the centuries with very few changes to the present day. Originally used on horseback by Samurai warriors Kyudo was later adapted for use on foot. The present shooting distance is 28 metres.

From the beginning Kyudo has played an important part in the ceremonial, religious and cultural life of Japan. As well as being a physical activity with a specific purpose it is above all a method of training the mind and developing character.

Kyudo was first introduced to the outside world through the writing of the German philosopher Eugen Herrigel, author of Zen in the Art of Archery. This was followed in the 1960’s by visits to Europe and the USA by eminent Japanese teachers: Kyudo is now practised by enthusiasts around the world.

The United Kingdom Kyudo Association is responsible for setting the very highest standards in practice and ensuring a rigorous standard of safety. All the groups of UKKA and its members must have the required insurance cover and be of the required level to use a bow and arrows in a designated practice place. Senior instructors must have at least the 5th dan level ( minimum of 6 years training and annual attendance to national and European training seminars) and preferably the title grade of instructor (renshi – minimum of 8-10 years training), or teacher (kyoshi – minimum of 15 years training). Ordinary instructors must be graded and have completed the necessary training in correct safety procedure.

The International Kyudo Federation established in 2006.
The umbrella organisation for world Kyudo it includes representation from Japan, Europe, USA, Australia and Asia.

The Meishin Kyudo society was formed in 1975 and was one of the founding members of the United Kingdom Kyudo Association (UKKA).  Its members participate on a regular basis in all United Kingdom and European events.

By its nature Kyudo is suitable for women and men of all ages although, beginners must be 18 years old or older.

Kyudo is a completely amateur activity and requires a considerable commitment in terms of time. For this reason all visitors are asked to attend as observers before starting a training programme.

Beginners will start by using group equipment but at a later stage personal equipment will need to be bought. Students are advised not to buy equipment without the advice of their instructor. The selection of the right equipment requires experience and an understanding of individual needs.

Despite being hand made by traditional craftspeople the cost of bows and arrows is no more than the western equivalent. Training is conducted in traditional clothing of Hakama and Keikogi and these are among the first items a beginner will need to buy.

The most important requirement is a willingness to learn within the traditional framework of a Japanese Dojo. 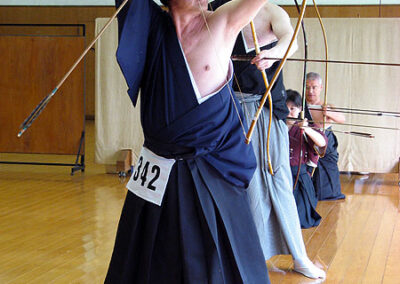 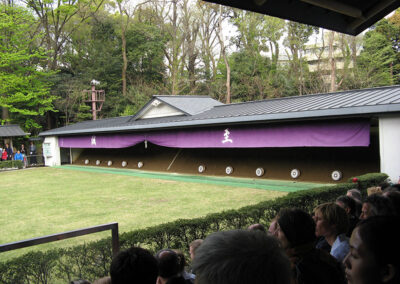 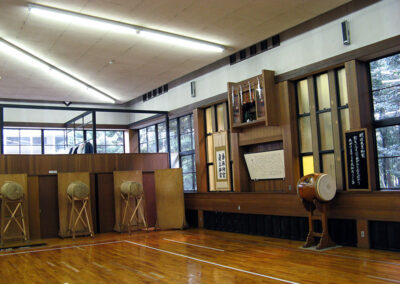 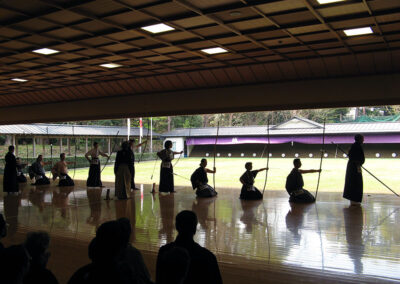 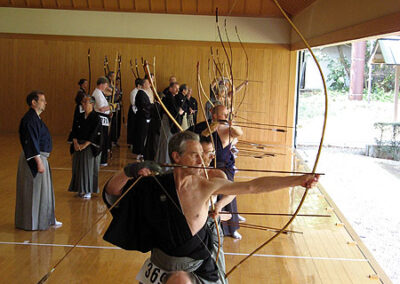 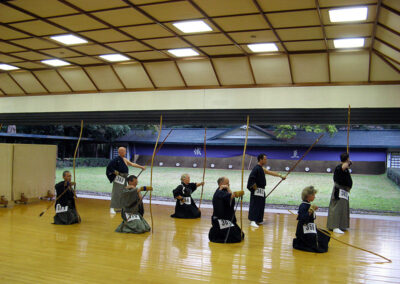 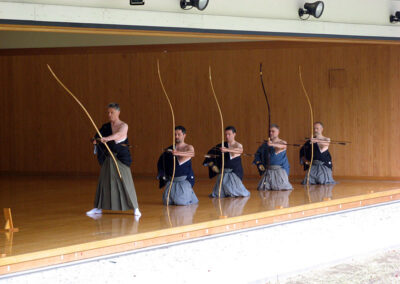 Members of the United Kingdom Kyudo Association, including four members from Meishin Kyudo Society attended this event celebrating the establishment of the International Kyudo Federation. It was held at the All Japan Kyudo Association Central DoJo in Tokyo. Over three hundred Kyudo practitioners from 17 countries received instruction from Japanese teachers.

The Tokyo Central Dojo is a typical construction of the type to be found in most regions of Japan. It is large enough to accommodate ten archers shooting in two groups of five. A special feature is the rotating Azuchi (target area) that can be moved automatically to make room for Enteki shooting (shooting over 60 metres). In addition it has spacious rooms upstairs for Makiwara training (shooting at the close range target) and meetings.

Training takes place on Saturday mornings 9.00am to 12.00pm

Directions to the Dojo on a Saturday